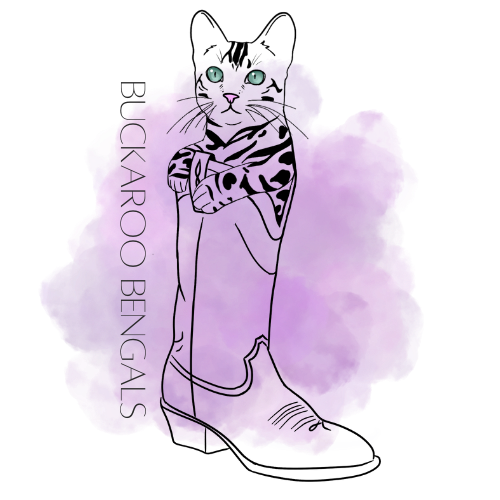 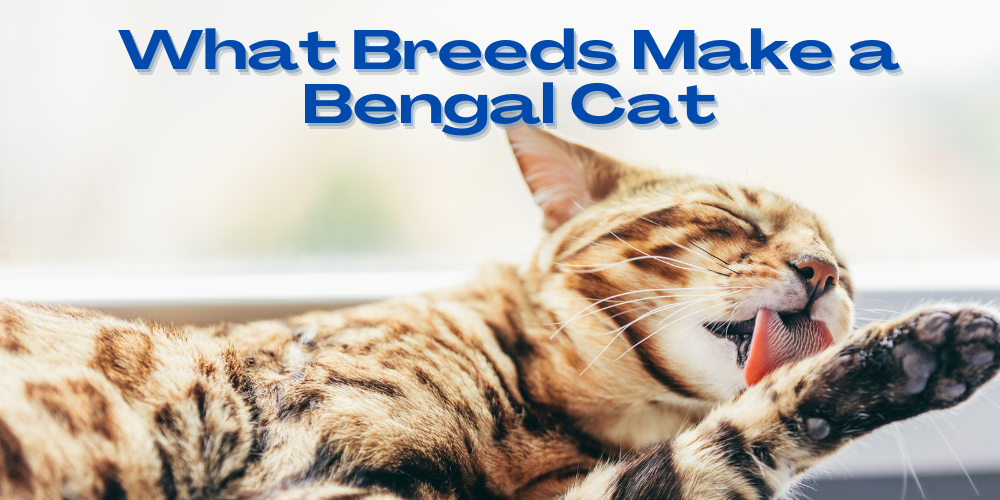 An acknowledged Hybrid in the home.

What breeds make a Bengal cat and why are they a recognized breed today? First, let’s take a look at what a Hybrid is.

According to Meriam Webster Dictionary, the term hybrid means: “relating to or produced from parents of different species, varieties, or breeds”. In the case of the Bengal cat, hybrid is referring to the fact that it is a deliberate mix of an Asian Leopard Cat, and a domestic shorthair cat.

But why did this happen and what caused people to decide this was a good idea? There are some very public people in the cat world that are criticizing the creation of the Bengal cat as a breed right now. So I think it is important to look back thru history to determine why Bengals came to be and what place they hold in our society.

The Asian Leopard Cat as an Ancestor

Asian Leopard Cats (ALC) are small wild cats found throughout a vast part of the world, they have the largest geographical distribution of all wild felines, including Asia, Korea, India, Pakistan, and Eastern Russia.

Because of major habitat differences, their size and coloring can vary greatly based on location. They range from golden brown to cool brown, can be either spotted or rosetted, have small heads, large round eyes, small forward cupping ears, and short thick tails.

Between 1960-1962 the ALC was beginning to be imported into the United States quite a lot. It was, however, quite a problem, as their temperaments weren’t suited to everyday household living. They were hitting local pet stores and then lots of them were being abandoned by owners, sold for their fur when it was determined that they didn’t do well in a domestic environment, or were given to local zoos.

It was during these years that several hobby breeders decided to try and hybridize them in order to create a breed that would appeal to people wanting a “wild cat” without the wild temperament.

Between 1970-1973 there was a huge outbreak of feline leukemia in domestic cats. Around this time it was discovered that many wild cats, including Asian Leopard cats, had a natural immunity to this disease along with several others.

At this time, Dr. Willard Centerwall, a professor at Loyola University, decided to begin studying Asian Leopard Cats’ genetics, to attempt to determine how to transfer this immunity to domestic cats, as well as in hopes that it would help him with his genetic research for pediatrics.

Both goals proved fruitless, and the research project was eventually scrapped. It is known however that because it was a research program, many of the first domestic shorthairs that were used to breed with the ALC in this hybrid program were felines donated to research there were no selection criteria.

When it was decided that the research program should be terminated, Dr. Centerwall needed to find a home for quite a few early-generation hybrid crosses, not an easy feat as they required more specialized care than a normal DSH cat.

View our Bengal Kittens for Sale

At the same time that the hobby breeders were trying to hybridize Asian Leopard Cats, and Dr. Centerwall was studying their genetics, another lady was also getting her foot in the door of the Bengal hybrid concept.

In 1963, after placing a domestic tomcat with her Asian Leopard Cat female as a companion with no breeding intention, Jean Mills had been the first recorded person in history to successfully cross the ALC with a domestic shorthair despite experts agreeing it wasn’t possible.

However, unforeseen family circumstances caused her to have to sell her land and give up breeding as a hobby. Later on, she was able to pick it back up and between 1975-1980 she restarted her breeding program again: “I hoped that by putting a leopard coat on a domestic cat, the pet trade could be safely satisfied. If fashionable women could be dissuaded from wearing furs that looked like friends’ pets, the diminished demand would result in less poaching of the wild species.”.

Many of the females that she used to restart her breeding program were gifts from Dr. Centerwall, who was happy to be a part of furthering the hybrid program. Three of these were F1 (first generation) females named Millwood Rorshack, Millwood Praline, and Millwood Pennybank. While there are still breeders working with ALC cats, it is a lot more effort and takes a lot of time, tears, and patience to create a Bengal line from scratch as wild cats are a lot harder to work with for various reasons. As a result many of the Bengals today can trace their lineage back to these three sisters that were a direct result of Dr. Centerwall’s research.

Bengals as a Breed

Breeding hybrids as a hobby is one thing, but when did they become recognized by the cat associations? Jean’s hard work both in breeding and in promoting Bengal cats paid off in 1983 when TICA (The International Cat Association) finally accepted the Bengal hybrid as a breed. However, in order to be a Bengal today, it must be four generations away from the Asian Leopard cat (F1, G2, G3, G4).

Between 1980-1982 The CFA (Cat Fanciers Association) allowed Bengals to be registered, however, they retracted this in 1985 after an F1 (first generation) had a bad incident. It was many years later in 2016 that CFA  accepted them again and not till 2018 that they achieved championship status with this registry. This is why most Bengal breeders today are primarily registered with TICA.

When Jean Mills started her breeding program for the second time, Bengals finally started being bred with more purpose. The goal was always to mix wild looks with a friendly temperament. But what exactly did this look like in Jean’s breeding program?

One of the first domestic cats that Jean found to breed with her three Millwood sisters, and thus continue to create the breed we know as Bengal today, was a domestic male cat that Jean found in India, wandering around the New Delhi zoo. This cat is known as Tori of Millwood, and he was instrumental in introducing the glitter gene into the Bengal Breed.

Any Bengal today who has the glitter gene can trace their lineage back to Tori as he had a huge impact on creating the breed. It is for this reason that some breeders choose to breed away from the glitter in an effort to maintain more genetic diversity in their breeding program.

Another breed that Jean used heavily in her program was the Egyptian Mau. This was for obvious reasons as the Egyptian Mau is one of the few pedigree cats that also have spots all over their bodies, including their bellies.

The Egyptian Mau brings patterns to the Bengals along with their wild ALC ancestors. They also bring longer back legs, medium-length tails, untarnished silver (to a silver Bengal program), well-muscled bodies, and short close coats.

You can find a lot of Bengal breeders that are involved in outcross programs using Egyptian Maus still to this day.

Outcrossing and its effects on the Bengal Breed today

Outcrossing has had a huge impact on the Bengal breed. Because such a small gene pool was used for the initial creation of the breed outcrossing has been so important in order to bring back genetic diversity.

Between 1973-1976, the Asian Leopard Cat was placed on the Endangered species list which put an end to indiscriminate importation of the ALC into the United States. This had a huge impact on the hobby breeders of the first Bengals, as it limited how many bloodlines could be used for the initial breeding of Bengals.

So outcrossing current bloodlines both in the past and in the present, is hugely important to a breed that hasn’t been established for very long.

Outcrossing has also contributed to a whole host of new Bengal colors. While some are still considered experimental, there are quite a few that have been accepted by the cat registries today as legitimate, breed standard colors:

As mentioned above, one of the breeds used to contribute to the Silver Bengal was the Egyptian Mau. Another breed that has a large contribution is American Short Hair. The ASH contributes the untarnished silver color, round eyes, rounded ears,  strong chin, good muscle tone, a thick tail, amazing personality, and a short close coat.

The seal lynx Bengal will be a pale ivory color, rosettes may not be visible at birth but they will continue to darken as they age, creating almost a reverse melanistic pattern, ie white instead of black with ghost markings. Seal Lynx Bengals always have vibrant blue eyes.

The Siamese and the Burmese cat genes also passed down the “pointed” gene to the Bengals, many breeders these days are trying to improve eye color intensity and marking contrast while actively breeding away from “points” as that is not bred standard.

Because the Bengal breed is so new, it has been my experience that a lot of breeders working on experimental colors are often a bit secretive about their outcross programs. While Blue, (dilute, a recessive gene) is accepted and becoming more common in Bengal’s genes.

A lot of Bengal breeders are hesitant to share their outcross programs with others as they strive to perfect new color and not have it taken out from underneath them by another color breeder enthusiast. Some breeders choose to breed more along the color and pattern route, while others choose to breed for wildcat type and conformation.

Opinions are often strong on both sides as to what will benefit the breed more and there can be quite a bit of conflict between breeders, leading to even more secrecy. The one thing that I believe all breeders should agree on, is that health and temperament are of the utmost importance when it comes to selecting outcrosses to breed with, what is essential, a small wild cat.

The Asian Leopard Cat brings the looks to the table, it is our responsibility to further the goals of the initial Bengal Breeders and continue with their purpose: Create a hybrid that is both beautiful and wild in type, and sweet and affectionate in temperament.

In this way, we can further the Bengal Breed in a positive way and continue to grace households with a wonderful family companion. Few things can compare to your Beautiful Bengal cat cuddling up with you by the fire on a cold winter day, or looking to you to go out for an evening stroll on their harness to see the gorgeous sunset.

Ultimately, the Bengal Breed is a miracle, and whether you want a little snow leopard look alike or a mini jaguar in your household, the skies are the limit for what you can find available today when it comes to the Bengal Breed.

While the breed may have come around by happenstance as a research project, they continue to make thousands of households happy all over the world as beautiful, mischievous, companions!

Some of our links do earn us commissions, but we are always honest and fair in our reviews. We would never recommend a product that we did not whole heartedly believe in.